Accountability is often a key metric in organisations. In the article we argue how encouraging accountability alone often leads to the exact opposite, and that there can be no true accountability without first instilling a sense of ownership…

Many organisations claim they need their people to be more accountable in order for the organisation to be more successful. They want people working for them who genuinely care, who are proactive and who are able to make make decisions that benefit the business. They therefore introduce mechanisms to implement and measure accountability.

The problem is, this methodolgy often creates the very opposite outcome to the one desired. By focusing on accountability organisations end up creating disengaged, demotivated people who don’t trust the organisation. There is, however, a way to solve this problem – it’s about making accountability the outcome, not the starting point. The starting point needs to be about creating ownership.

Why does starting with accountability create the opposite?

Fear is another extrinsic motivator that binds employees to their tasks – often fear of losing their job if they don’t complete tasks satisfactorily, or fear of receiving negative feedback. The fear that is so prevalent in organisations leads to employees who are often operating in ‘threat brain’ where they are unable to do their best work, or make the best decisions, and which ultimately leads to disengagement and distrust.

People need to feel that their interests and drivers are bound up in a project’s outcomes.

Introducing accountability measures into organisational cultures where people are motivated extrinsically, where they may be operating in ‘threat brain’, can result in more distrust and more disengagement. Take, for example, making new managers fully accountable for developing their business area. In an organisation where employees are worried about job security, or are competing for pay rises and promotions, accountability can be viewed as another way to pit managers against each other, and whilst some might thrive in that environment, others might become disengaged and demotivated.

Additionally, it is very difficult to introduce accountability where goals are unclear, unachievable or unfair. Asking employees to be accountable for something they don’t fully understand can lead to people losing any sense of commitment and self-confidence.

How do you create genuine accountability?

In order to create genuine accountability, accountability cannot be the starting point. Instead, the focus needs to be creating ownership, with accountability as the outcome. It is about helping employees to be intrinsically motivated to complete their tasks and projects. People need to feel that their interests and drivers are bound up in a project’s outcomes.

To create ownership, the following elements need to be in place in an organisation:

Trust – When employees don’t trust an organisation, when they fear their position, or are operating in ‘threat brain’ they are less likely to be open and honest about their own motivations, values and aspirations. They are less likely to share opinions, ideas and contribute to discussions for fear of negativity. This impedes the willingness and ability to take ownership. Creating trust requires leaders of the organisations to model the way, being open, transparent and willing to be vulnerable.

Clarity – If people don’t understand the outcomes and purpose of a project, they cannot possibly take ownership of it. Using a tool such as The Ownership Paradigm can help facilitate a conversation that generates the clarity needed in order for people to be able to take ownership. This is about helping people to explore the meanings and interconnections of six facets of their work: outcomes, reputation, action, plan, strategy and purpose. If employees find clarity here, they can begin to own what they do and how they do it, increasing commitment and boosting self-confidence. This is when employees choose to be accountable.

Freedom –  Finally, once the goals and strategy are clear, people need to be given the freedom to get on with the task if they are going to truly own it. This again increases commitment and self-confidence and results in employees choosing to be accountable for the outcome of the project.

By focusing on creating ownership through trust, clarity and freedom, organisations will find that that their employees will choose to be accountable. They will be far more engaged and committed, genuinely caring about the outcomes and about a project’s creative process. 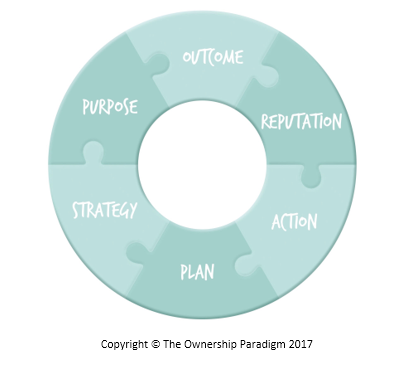 To find out more about using The Ownership Paradigm tool, sign up to Farscape’s free webinar on 10th November 2017 at 11am where we will be discussing this fascinating topic in more detail.